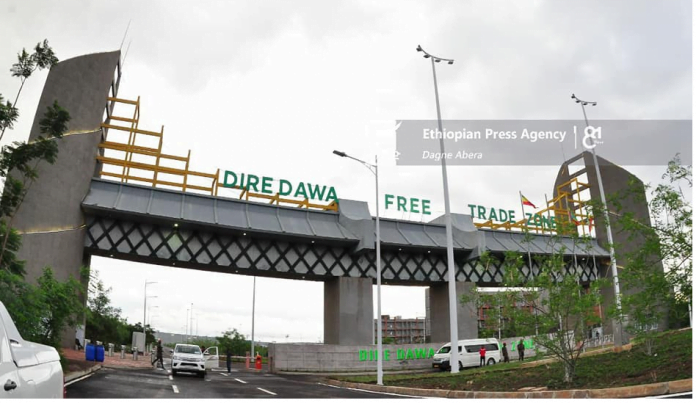 The Dire Dawa Free Trade Zone, the first of its kind in Ethiopia, has officially been inaugurated today.

The launch comes a day after the PM Abiy administration adopted a Special Economic Zone Policy that authorities say would pave the way for the establishment of similar projects across the nation.

Such zones are very important to facilitate export and import, as has been observed in the economically developed world, Prime Minister Abiy said in his speech at the imagination.

“The world is changing exponentially. Trying to accept the new world with old thinking is considered as good as carrying our youth on our shoulders in the same way we carried them as children,’ he continued.

“The Free Trade Zone we are building is one of our ways to integrate into a rapidly changing world,” he said. “I have no doubt that the zone will not only facilitate trade and investment but also enhance our technological capabilities.”

He also affirmed that trade zones like this will be multiplied with efficient logistics, business, and various modern services in a way that will enable competition with the global trade system.

The free trade zone is expected to serve as a place where various goods are imported from different countries, produced, and supplied to the foreign market, where efficient commercial financial and logistics services are provided.

Sandokan Debebe, CEO of Industrial Parks Development Corporation (IPDC), said the free trade zone will create the ability to stabilize the commodity price inflation that is being observed in our country in connection with the logistics costs.

The FTZ will also fill the gap in the supply of raw materials and value chain faced by the manufacturing industries, he added.

Legal frameworks, infrastructure arrangements, and other services to make the Free Trade Zone operational have already been dealt with, officials say.

“As outlined in its Logistics Strategy, it has identified the establishment of Free Trade Zones in Ethiopia as one of the enablers for facilitated trade, bringing logistics efficiency and attracting FDI,” said Dagmawit Moges, Minister of Transport and Logistics.

To realize this, the Minister said the Logistics Council has been coordinating and carrying out “the necessary legal frameworks, infrastructure arrangements and other relevant services for the Dire Dawa Free Trade Zone and made it ready for use.”

As per the IPDC country’s customs system implemented in the Free trade zone and connected to the dry port of Dire Dawa would be a way that facilitates the development.

Various incentives have also been readied for investors, organizations, importers and exporters operating in the trade zone, officials said. IPDC’s Dire Dawa Industrial Park is already attracting foreign investors from China, Italy, and Sri Lanka that are specialized in Garment, Apparel, and Textile and 100% exportable products.

The City appreciates this, he said, adding that the administration would provide all the necessary support for the efficient service of the free trade zone.

Obasanjo: How I helped to resolve Ethiopia’s Tigray conflict -thecable.ng

Obasanjo: How I helped to resolve Ethiopia’s Tigray conflict -thecable.ng