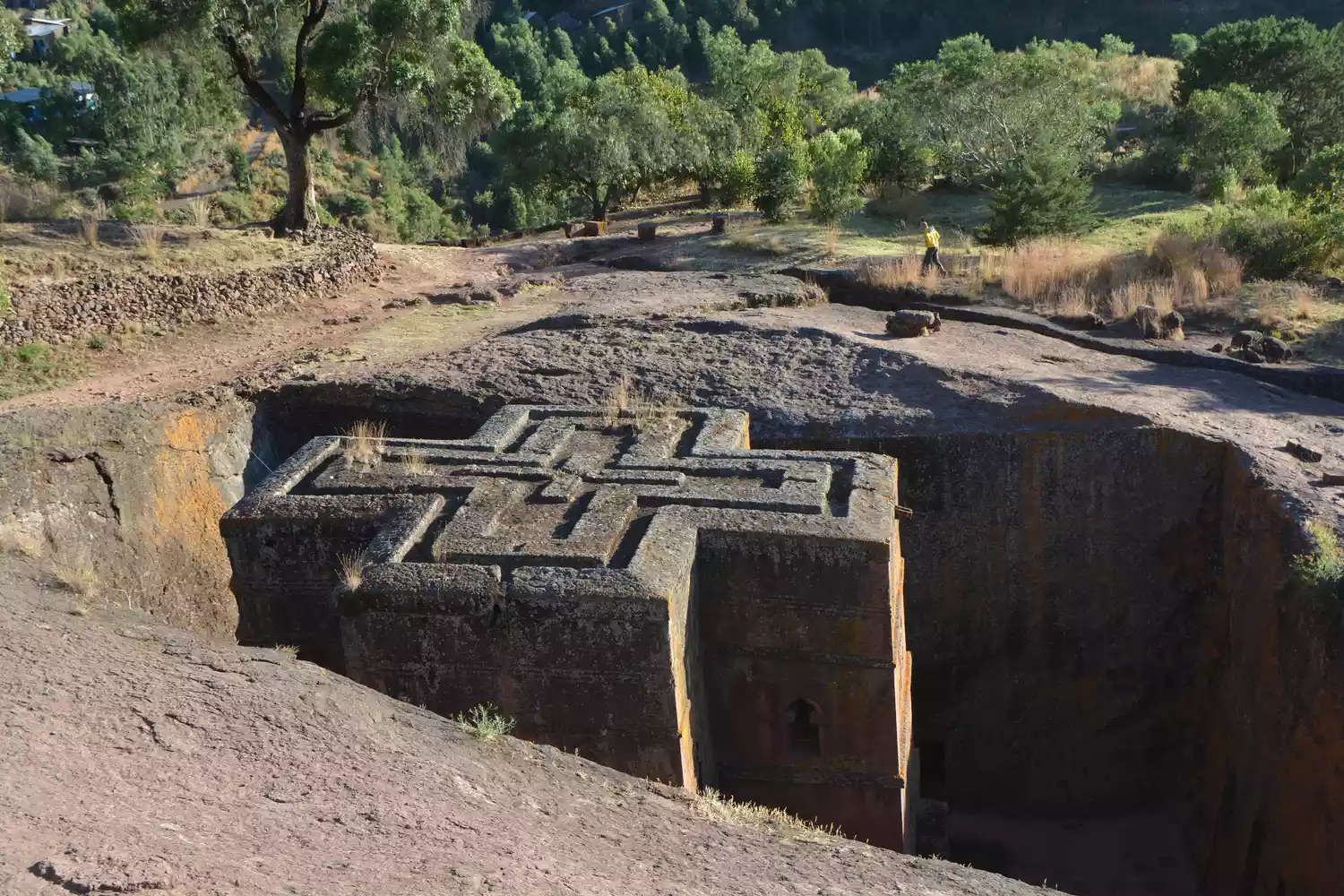 Given the slow progress of Romanization of North Africa, it is perhaps surprising how quickly Christianity spread across the top of the continent.

From the fall of Carthage in 146 BCE to the rule of Emperor Augustus (from 27 BCE), Africa (or, more strictly speaking, Africa Vetus, ‘Old Africa’), as the Roman province was known, was under the command of a minor Roman official.

But, like Egypt, Africa and its neighbors Numidia and Mauritania (which were under the rule of client kings), were recognized as potential ‘bread baskets’.

The impetus for expansion and exploitation came with the transformation of the Roman Republic to a Roman Empire in 27 B.C.E. Romans were enticed by the availability of land for building estates and wealth, and during the first century C.E., north Africa was heavily colonized by Rome.

Emperor Augustus (63 B.C.E.–14 C.E.) remarked that he added Egypt (Aegyptus) to the empire. Octavian (as he was then known, had defeated Mark Anthony and deposed Queen Cleopatra VII in 30 B.C.E. to annex what had been the Ptolemaic Kingdom. By the time of Emperor Claudius (10 B.C.E.–45 C.E.) canals had been refreshed and agriculture was booming from improved irrigation. The Nile Valley was feeding Rome.

Under Augustus, the two provinces of Africa, Africa Vetus (‘Old Africa’) and Africa Nova (‘New Africa’), were merged to form Africa Proconsularis (named for it being governed by a Roman proconsul).

Over the next three and a half centuries, Rome extended its control over the coastal regions of North Africa (including the coastal regions of modern day Egypt, Libya, Tunisia, Algeria, and Morocco) and imposed a rigid administrative structure on Roman colonists and indigenous peoples (the Berber, Numidians, Libyans, and Egyptians).

By 212 C.E., the Edict of Caracalla (aka Constitutio Antoniniana, ‘Constitution of Antoninus’) issued, as one might expect, by the Emperor Caracalla, declared that all free men in the Roman Empire were to be acknowledged as Roman Citizens (up till then, provincials, as they were known, did not have citizenship rights).

Factors Which Influenced the Spread Of Christianity

Roman life in North Africa was heavily concentrated around urban centers—by the end of the second century, there was upwards of six million people living in Roman North African provinces, a third of those living in the 500 or so cities and towns which had developed.

Cities like Carthage (now a suburb of Tunis, Tunisia), Utica, Hadrumetum (now Sousse, Tunisia), Hippo Regius (now Annaba, Algeria) had as many as 50,000 inhabitants. Alexandria considered the second city after Rome, had 150,000 inhabitants by the third century. Urbanization would prove to be a key factor in the development of North African Christianity.

Outside of the cities, life was less influenced by Roman culture. Traditional Gods were still worshipped, such as the Phonecian Ba’al Hammon (equivalent to Saturn) and Ba’al Tanit (a goddess of fertility) in Africa Proconsuaris and Ancient Egyptian beliefs of Isis, Osiris, and Horus. There were echoes of traditional religions to be found in Christianity which also proved key in the spread of the new religion.

The third key factor in the spread of Christianity through North Africa was the resentment of the population to Roman administration, particularly the imposition of taxes, and the demand that the Roman Emperor be worshiped akin to a God.

After the crucifixion, the disciples spread out across the known world to take the word of God and the story of Jesus to the people. Mark arrived in Egypt around 42 C.E., Philip traveled all the way to Carthage before heading east into Asia Minor, Matthew visited Ethiopia (by way of Persia), as did Bartholomew.

Christianity appealed to a disaffected Egyptian populous through its representations of resurrection, an afterlife, virgin birth, and the possibility that a god could be killed and brought back, all of which resonated with more ancient Egyptian religious practice.

In Africa Proconsularis and its neighbors, there was a resonance to traditional Gods through the concept of a supreme being. Even the idea of holy trinity could be related to various godly triads which were taken to be three aspects of a single deity.

North Africa would, over the first few centuries C.E., become a region for Christian innovation, looking at the nature of Christ, interpreting the gospels, and sneaking in elements from so-called pagan religions.

Amongst people subdued by Roman authority in North Africa (Aegyptus, Cyrenaica, Africa, Numidia, and Mauritania) Christianity quickly became a religion of protest—it was a reason for them to ignore the requirement to honor the Roman Emperor through sacrificial ceremonies. It was a direct statement against Roman rule.

This meant, of course, that the otherwise ‘open-minded’ Roman Empire could no longer take a nonchalant attitude to Christianity—persecution, and repression of the religion soon followed, which in turn hardened the Christian converts to their cult. Christianity was well established in Alexandria by the end of the first century C.E. By the end of the second century, Carthage had produced a pope (Victor I).

Alexandria as an Early Center of Christianity

In the early years of the church, especially after the Siege of Jerusalem (70 C.E.), the Egyptian city of Alexandria became a significant (if not the most significant) center for the development of Christianity. A bishopric was established by the disciple and gospel writer Mark when he established the Church of Alexandria around 49 C.E., and Mark is honored today as the person who brought Christianity to Africa.

Alexandria was also home to the Septuagint, a Greek translation of the Old Testament which traditional has it was created on the orders of Ptolemy II for the use of the large population of Alexandrian Jews. Origen, head of the School of Alexandria in the early third century, is also noted for compiling a comparison of six translations of the old testament—the Hexapla.

It is recorded that in 180 C.E. Twelve Christians of African origin were martyred in Sicilli (Sicily) for refusing to perform a sacrifice to the Roman Emperor Commodus (aka Marcus Aurelius Commodus Antoninus Augustus).

The most significant record of Christian martyrdom, however, is that of March 203, during the reign of the Roman Emperor Septimus Severus (145–211 C.E., ruled 193–211), when Perpetua, a 22 year old noble, and Felicity, whom she enslaved, were martyred in Carthage (now a suburb of Tunis, Tunisia).

Historical records, which come partially from a narrative believed to have been written by Perpetua herself, describe in detail the ordeal leading up to their death in the arena—wounded by beasts and put to the sword. Saints Felicity and Perpetua are celebrated by a feast day on March 7th.

Latin as the Language of Western Christianity

Because North Africa was heavily under Roman rule, Christianity was spread through the region by the use of Latin rather than Greek. It was partially due to this that the Roman Empire eventually split into two, east and west. (There was also the problem of increasing ethnic and social tensions which helped fractured the empire into what would become the Byzantium and Holy Roman Empire of medieval times.)

It was during the reign of Emperor Commodus (161–192 C.E., ruled from 180 to 192) that the first of three ‘African’ Popes was invested. Victor I, born in the Roman province of Africa (now Tunisia), was pope from 189 to 198 C.E. Amongst the achievements of Victor I are his endorsement for the change of Easter to the Sunday following the 14th of Nisan (the first month of the Hebrew calendar) and the introduction of Latin as the official language of the Christian church (centered in Rome).

Titus Flavius Clemens (150–211/215 C.E.), aka Clement of Alexandria, was a Hellenistic theologian and the first president of the Catechetical School of Alexandria. In his early years, he traveled extensively around the Mediterranean and studied the Greek philosophers.

He was an intellectual Christian who debated with those suspicious of scholarship and taught several notable ecclesiastical and theological leaders (such as Origen, and Alexander the Bishop of Jerusalem).

His most important surviving work is the trilogy Protreptikos (‘Exhortation’), Paidagogos (‘The Instructor’), and the Stromateis (‘Miscellanies’) which considered and compared the role of myth and allegory in ancient Greece and contemporary Christianity.

Clement attempted to mediate between the heretical Gnostics and the orthodox Christian church and set the stage for the development of monasticism in Egypt later in the third century.

One of the most important Christian theologians and biblical scholars was Oregenes Adamantius, aka Origen (c.185–254 C.E.). Born in Alexandria, Origen is most widely known for his synopsis of six different versions of the old testament, the Hexapla.

Some of his beliefs about the transmigration of souls and universal reconciliation (or apokatastasis, a belief that all men and women, and even Lucifer, would ultimately be saved), were declared heretical in 553 C.E., and he was posthumously excommunicated by the Council of Constantinople in 453 C.E. Origen was a prolific writer, had the ear of Roman royalty, and succeeded Clement of Alexandria as head of the School of Alexandria.

Tertullian (c.160–c.220 C.E.) was another prolific Christian. Born in Carthage, a cultural center much influenced by Roman authority, Tertullian is the first Christian author to write extensively in Latin, for which he was known as the ‘Father of Western Theology’.

He is said to have laid down the foundation on which Western Christian theology and expression is based. Curiously, Tertullian extolled martyrdom, but is recorded of dying naturally (often quoted as his ‘three score and ten’); espoused celibacy, but was married; and wrote copiously, but criticized classical scholarship.

Tertullian converted to Christianity in Rome during his twenties, but it was not until his return to Carthage that his strengths as a teacher and defender of Christian beliefs were recognized. The Biblical Scholar Jerome (347–420 C.E.) records that Tertullian was ordained as a priest, but this has been challenged by Catholic scholars.

Tertullian became a member of the heretical and charismatic Montanistic order around 210 CE, given to fasting and the resultant experience of spiritual bliss and prophetic visitations. The Montanists were harsh moralists, but even they proved to lax for Tertullian in the end, and he founded his own sect a few years before 220 C.E. The date of his death is unknown, but his last writings date to 220 C.E.

The Nubian Queen Who Fought Back Caesar’s Army